One big note on these clays:  That black stuff that often appears on these clays after firing is nothing more than oxidation: a chemical process that occurs when base metal  clays are exposed to oxygen.  To clean off the oxidation you can either use a radial bristle brush

or drop it (after quenching it in water) in a pickle solution. If you don’t know what pickle is, FDJ Tools has a nice little article on it. A safe alternate to the commercially available pickles is to mix 1/4 cup of citric acid per a quart and 1/2 of distilled water.   Sugarcraft.com (look under hard candy ingredients)  sells a one pound jar of citric acid crystals for about $6.00.  You can also find it in health food stores or chemical supply houses (ask for reagent citric acid). If you heat it in a crock, potpourri pot or stove top in a Pyrex baking dish (or other stove safe glass or pottery container) – ventilate. You can also use undiluted, reconstituted lemon juice. Heating it will make it work faster.  As I’ve never used the lemon juice, I’m not sure of the concentration – experiment.  Don’t forget to neutralize the pickle (whichever type you use) by boiling it in baking soda (small handful) and water (two cups) for a little while.  Baking soda is a base and will neutralize acid.  If you don’t neutralize the pickle – the acid will continue to work and will eventually dissolve your work.  Not such a great idea! Rinse off the baking soda!

2004 – Hadar Jacobson experiments with the first bronze and copper clays.

mid – 2008: The first version of Bronze clay was developed by Bill Struve of Metal Adventures.

Want to make your own clay? Yeah, really, you can make it at home!  Here’s instructions from Del Feast at the Metal Clay Academy’s site.

Bronze clay hit the scene at the 2008 PMC conference.  BRONZclay is 11% tin and the other 89% is copper,  water and a “non-toxic” binder (as we don’t know what it is, it’s hard to tell).  BRONZclay is available at RioGrande, Metal Clay Supply, Cool Tools, New Mexico Clay, among others. Celie Fago has a great story to tell about her first encounters with BRONZclay here.

Recently, Metal Adventures came out with a quick fire version (which they are calling “fast-fire”) of BRONZclay.  The big difference here is, obviously, firing time.  Fastfire BRONZclay can fire in as little as two hours compared to the 4-9 hours required by regular BRONZclay. That’s a substantial savings in time.   I just started working with this clay and find it very easy to carve. It has a very fine grit and reminds me of a very soft sandstone. While it’s easy to carve, it’s also easy to over carve it.  FF Bronz clay is rather flexible and very fragile.  It takes and holds patterns pretty well and my last three firings went perfectly.  One note, Metal Clay Adventures notes that this clay MUST be fired with a SLOTTED lid  and coconut shell carbon.

I just pushed the lid back a bit so that there was a gap – instead of buying an additional lid.  I believe they also state this option in the instructions included in the packet. 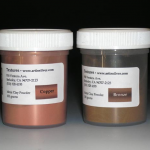 Hadar Jacobson has  developed a Bronze Clay, Copper, White Bronze, Steel and Pearl Gray Steel in powdered form available at  her Textures store.  The copper clay is too slumping/silky and I guess you could call it hard to work.  I also had inconsistent firing results,  most of the time.  I had better firing results with the bronze.  I really liked the pearl gray steel clay.  But, I am very cautious about using it in my studio as steel, especially in a powdered form, can be very detrimental in a silver/gold smiths studio.  It can contaminate other metal clays, get into the pickle (that cleans oxides from torch soldering)  and copper plate my jewelry.  So, be wary of working with this clay if you indulge in the other types of metal fun.

Odak, a Turkish company,  carries Prometheus clay and has information on it’s use. You can purchase Prometheus Bronze and Copper Clays, as of this writing, at Prometheus Hobby.  Prometheus has significantly changed their formulas and their clay is now very smooth. 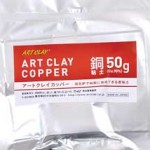 available at Art Clay World and other places.

I’m just ordering some now to try out.  I like the sound of it: 30 minute kiln firing, no carbon, torch firing, 10% shrinkage.  If it works, it will be the one I use as I have yet to find a copper clay that I like.

Check out the great information on using BRONZclay from Cool Tools, written by Mardel Rein. Rio Grande has put out a PDF on working with their Bronz and Coppr clay.  It’s a great source of information. On the bottom of Rio’s regular BRONZclay order page there is a short video.  Facet Jewelry also has much knowledge to share on its Clays and Resins page.  The Metal Clay Academy is a great source of information on all things metal clay.

Bronzclay videos to watch:  Cool Tools. Prometheus has a video on firing their clay using their paper towel/fiber blanket system.  Hadar Jacobson has a video on how to mix her clays.